skip to main | skip to sidebar

I look aside and without staring at him in the eye I confess that I've missed him. Then I reach for the glass and take a hearty sip of my drink. It is easier to say things if I don't look at him and instead I fix my sight on an undetermined point of the restaurant, maybe the window or the reflection of the couple sitting on the table beside us. I notice that I've torn my napkin to pieces, and I have crumpled the scraps almost automatically into a ball that I hold tight in my fist. From there his hand is so distant, I can't touch it because he'll remove it as if he'd been stung. And when it starts raining and millions of small hands pound on the window, I remember the day that we first went to dinner together and he reached for my lips with his lips from across the table. My throat gets knotted up as I wait for him to say something. He says he's missed me too: it is just a simple natural polite reaction., what I've said hasn't affected him and he fidgets with his phone, he looks at it and reads something I'll never know what is. As he reads in his phone he lowers his head. From that angle the light hits a side of his face to reveals several wrinkles branching from the corner of his eye. I rejoice myself and I think that I'll be young in 10 years and that he'll be nearing 60, but then I see this as a way to relieve me, to transport myself to that moment in which this emotion will cease to exist.
I remind him of the night, about twelve months ago (one of many nights) in which I wasn't myself and I did what he did, and I drank what he drank, and when I went to see myself in the mirror I saw my nose bleed, and my nostrils were flaring hysterically. I washed my face frenetically as if if I wanted to erase that feeling of being extremely aware, awake and naked. Few minutes later I went back to his bedroom and I lied next to him as I put my head on his chest. I put my hand on his heart and I felt it beat rapidly like a hummingbirds. I fell asleep and a strange dream streamed off the sound of his heartbeat as if i was dragged into a tunnel. In the dream a wall of white bricks was falling as if shaken by the earth and shattered covering me completely in white dust. I woke up two hours later slobbering over him, my eyes were tired and swollen and my skin was dry.
Posted by Deus Ex Machina at 8:00 PM 2 comments: 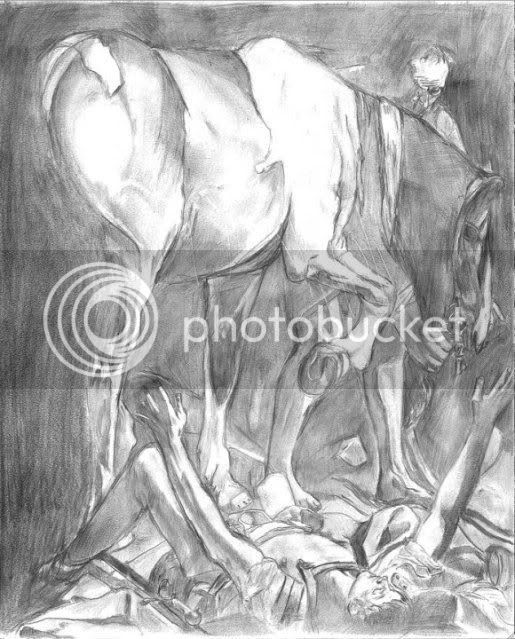 Rendering of a painting by Vermeer 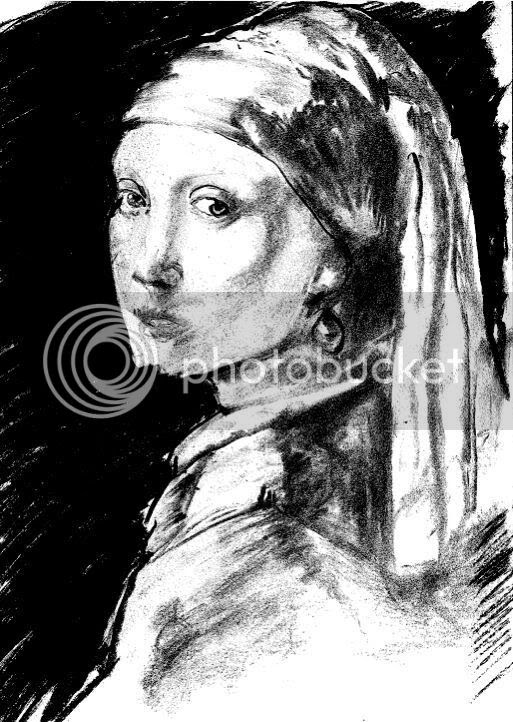 Girl with a Pearl Earring: Noir by Cristhian Barron 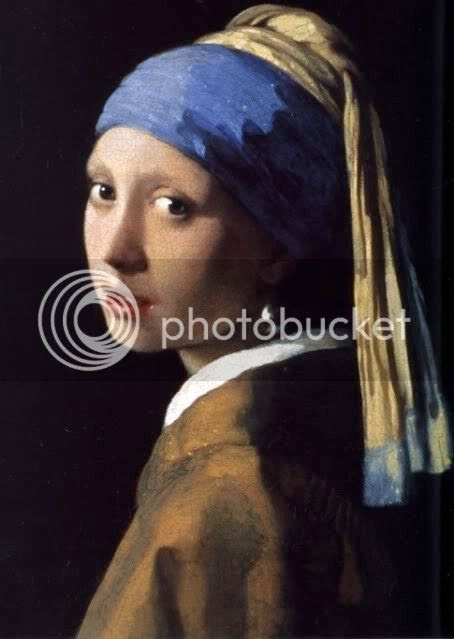 original Girl with a Pearl Earring by Johannes Vermeer (circa 1665)
Posted by Deus Ex Machina at 9:00 PM 1 comment: 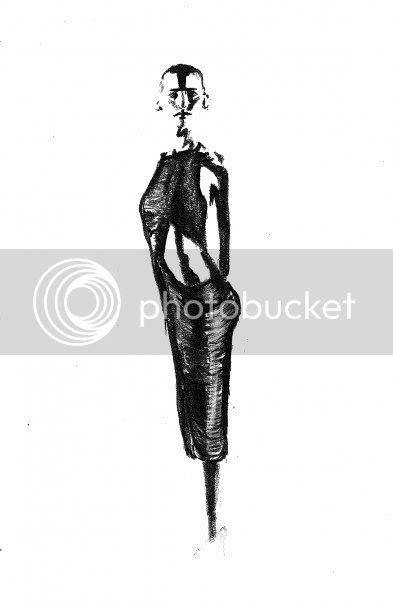 To Lee McQueen by Cristhian 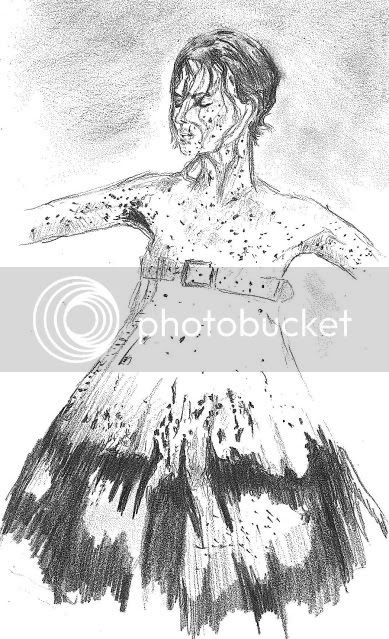 The considered love for nature and the passionate intensity for what he did in his career made my father somewhat shelled. The unflappable way in which he made his drawings, almost as if he didn't touch the surface of the paper with his pen, completely quite and eager at the same time distracted me from my chores as I passed by the door of his studio which was left ajar and from which I stayed to observe him.
He was leaning forward on his drawing desk, sketching a picture off a biology textbook. The gray overwhelmed his head and of the side of his face little vessels of blood devoured his eyes. He turned around slowly and I hid half of myself frozen, still observing him, having been seized by his vacant gaze. There was a long distance between me and his desk which was completely isolated in a room that was otherwise barren and minimally decorated. I walked forward and my steps echoed like when you enter a cathedral in which the sound of each step mixes with the whispers of people's prayers. I climbed up the stool he was sitting on and he showed me the drawing he was making: it was the skeleton of wild cat, its naked interior eternally hissing. I was startled by the powerful contrast of the black ink against the grainy paper that he was using, the long traces of each bone, softly shaded. "This is how a cat looks inside," he said. I thought for a moment of the disparity of it and why hadn't he instead drawn something more matter of fact, a face, a pretty animal, a plate of fruit? why did he choose to draw the bone structure of a cat? It was, however, an excellent drawing with a symbolic connection to my father's spirit, which as a child I could sense. My concept of art was very immature then but whenever I entered my father's room I could almost touch the craquelures of what could have been a famous painting of some sort of religious iconography. Something unknown lied there, in that room, and even though my father and I never quite said much, and in fact remained in complete silence for most of the time, made me understand each one of his words, as they slowly crept out of his mouth.
There was a religious anguish in the things he said. As if he wasn't talking only to me but also to a God who hovered behind me. He was scared of approaching the definition of mortality and this is why this drawing made it more foreboding. Trying to find the deeper meaning of our feeble structure, of the structure of a cat. But as i said earlier, he loved nature deeply, he could observe the simplicity of the most unremarkable animal and give complete meaning to their existence and their importance in maintaining the harmony of the world we lived in. Frustrated as he was with other things like the difficult economy that weighed upon my family and the unfortunate incompatibility he had with my mother, he'd still gripped his subject patiently and minutely.
Perhaps it was the generous way in which the ink was distributed on each component of the animal. He enhanced the shading by illuminating the body from the right corner of his sheet of paper making the hind legs of his subject plunge darkly as if the skeleton was prepared to leap upwards towards the light that shined upon it. It was not that the creature had such realistic effect one could see it emerge of the surface, it was that the dimension that my father added to it made it more imprisoned within the the sheet of paper.
Posted by Deus Ex Machina at 11:03 PM 3 comments:

"Je t'aime" is the first phrase we hear her say and for the rest of the movie she's restlessly wandering the streets of Paris, alone. Her face doesn't have any make up on and her lips curve down, fully, eternally forlorn. And after much silence in a few words she says what she fears the most: She won't age, because she'll go to sleep first. She disappears into the night, handsomely, like a boat. The image stays intact and 50 years later she hasn't aged, and the lonely trumpet that lulls her through a night in Paris reminds us of youth, in black and white and gray. In other circumstances, the actress has already died in the hands of tragedy. However, she never dies without having loved first, as if that satisfied the meaning of life, entirely. She quietly squirms and puts both fists near her chest because she knows she's a woman. She's bled, she's seen her hips grow and she's walked the streets at night in very high heels that have swollen her feet. And then after that, after she's smoked too many cigarettes and drank too many drinks, she wakes up in a different world, hangover, naked, and a letter rests beside her on her pillow. The handwriting of a man is impulsive, the letters are almost bolted onto the paper with violent strength and the ink splatters slightly from the stems of each "d" or each "y." In her thoughts, she talks without moving her lips and the coarse smoke laden voice reads the letter aloud in French. In it a fragment of a poem by Rilke, "From here there is no place that does not see you, you must change your life." Or I think that's what it said, the subtitles were white and overlapped on the pale close up of her face. She withdraws the letter and contemplates an empty landscape then she looks at me, in the dark, I look up and see the movement of the image travel through light from the film strip as it expands widely before me. Ladders of dust soar and cross through the the path of light with the sensuality of the smoke of a cigarette. The scene has changed in the meantime, and when I fix my eyes back on the screen, two hands are dipped in water, and off the water an image appears and becomes a photograph of herself in other times, when she was happy holding a man tightly. It ends, She ends. 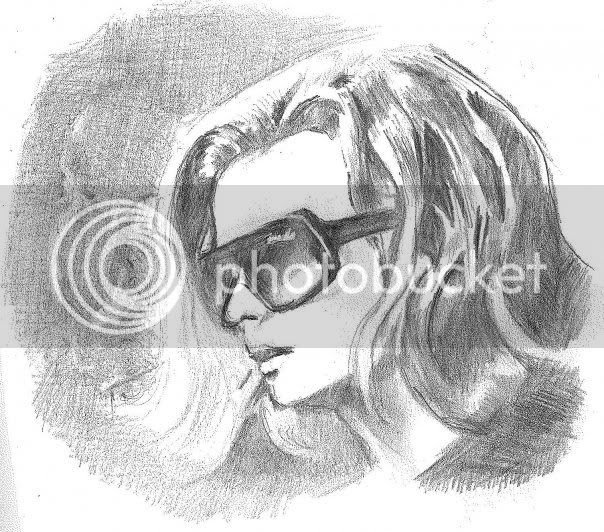